IPVanish
IPVanish is one of the most versatile VPNs, with apps for nearly every platform. It’s easy to use and very fast. Connect all your devices with a single account.
总体得分
8.4
/10

IPVanish is a US-based VPN service. Even though it is within Five Eye surveillance jurisdiction, the company has an excellent record when it comes to user privacy, with a strict no-logging policy.

It has a large global server network, with more than 2,000 servers and 40,000 IP addresses in over 75 locations. The servers are secured with 256-bit encryption, which protects your data from hackers and keeps you anonymous while online.

IPVanish has native apps for Windows, macOS, Android, iOS, Fire TV, and many more platforms. It’s also compatible with most commercial routers. IPVanish doesn’t have a limit in the number of simultaneous connections. 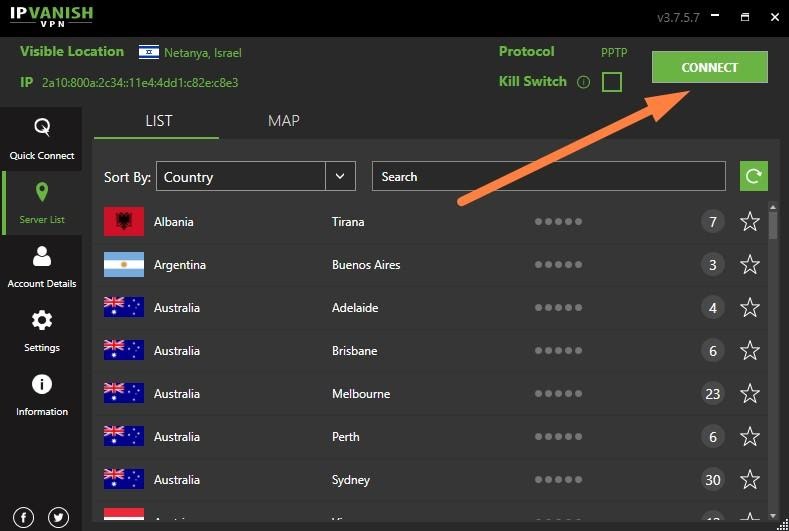 Unlike most premium VPNs that are located in privacy havens like Switzerland, or the British Virgin Islands, IPVanish is headquartered in the United States. This means that it has to work extra hard to prove that it respects user privacy and won’t turn over any data logs to the authorities.

The IPVanish Privacy Policy is very clear that they do not collect, monitor, or log any browsing activity. Once you connect with a server and enter the VPN tunnel, you become anonymous. There is some basic information that they do need to keep to identify bugs and improve the VPN service. However, this data is not identifiable and doesn’t include IP addresses, time stamps, or DNS inquiries. They also have to keep basic user information on file, such as the email used to register the account and payment information in order to manage the account.

IPVanish has a sleek modern VPN client with green and black colors that makes it seem like it came from the Matrix movies. It is a very easy VPN to download and install. When choosing a server, you can either pick from a list of countries or view all the location options on a map. Once you click the Connect button, IPVanish will automatically connect to the best server in the location and the best VPN protocol. 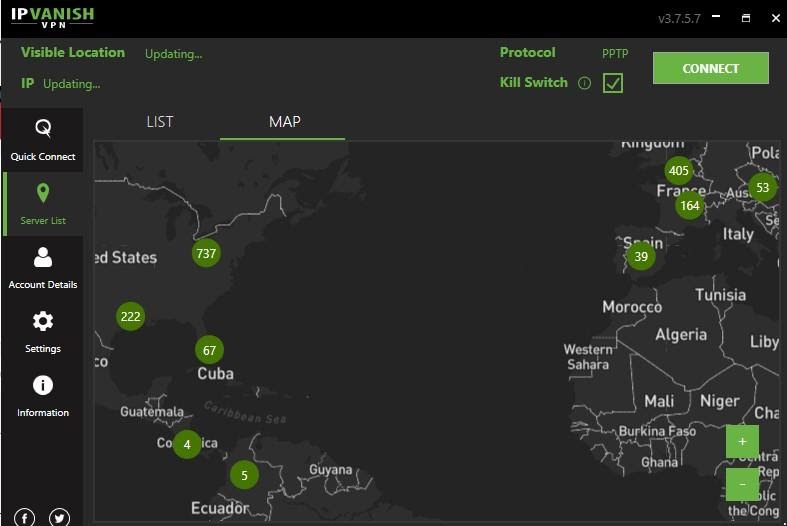 When you connect a VPN, it reroutes your internet connection from the closest server to your physical location to a remote one that can be on the other side of the world. So, it makes sense that this change will affect your internet speed, but the question is, by how much. IPVanish has high-speed servers that allow for unlimited speed and no bandwidth limits, so your speed shouldn’t be reduced too much.

I ran several speed tests, first the baseline test without IPVanish turned on:

Then, I connected to a UK server, which is around 2,300 miles from my physical location.

Running speed tests is an inexact science as there are so many factors that can speed up or slow down your connection. The important thing is I didn’t notice a drop in performance when browsing the internet or streaming shows on Netflix.

IPVanish has over 2,000 servers in 75 locations. The majority of the servers are located in North America and Europe. There are some servers in Australia, Asia, and South America, plus six servers in South Africa. IPVanish recently upgraded its network to include the WireGuard protocol which increases the speed and security of your connection.

IPVanish allows for unlimited simultaneous connections with each license. It has apps for Windows, Mac, Android, iOS, Linux, Fire TV, Amazon Fire, Chromebook, and some routers. The unlimited connections are above average as other major providers such as NordVPN (6 connections) and ExpressVPN (5 connections) set limits.

For all questions and concerns, IPVanish has 24/7 customer support. They can be contacted via live chat, email, telephone, or find your answer in the extensive knowledge base. The live chat is always available, and the representatives are knowledgeable and able to fix most technical problems. The company is also quick to respond to emails. If you prefer to talk with a person, IPVanish has a phone number listed in seven different countries, although the wait time can be on the long side.

IPVanish has two subscription packages. There is the option to pay by the month or a yearly plan which gives significant savings, but you have to pay for the entire year upfront.

Both plans include all the features, including unlimited speeds and simultaneous connections.

However, only the annual plans come with a 30-day money back guarantee.

IPVanish is a reliable VPN provider that gives users the freedom to protect all their devices with a single license. There were no noticeable slowdowns in internet speeds, even when connecting with servers far from my actual location. It comes with all the necessary privacy features, including a kill switch to protect user privacy.

Ranking
Overall rank
84
Privacy
80
Features
85
User score
84
Pros
No limits on speed, data, or simultaneous connections
Servers in over 75 locations
Apps for all major platforms
Cons
Located in the US
Some servers have lagging issues
Pricing
$11.99
$2.97/mo
Money Back Guarantee 30 days
January Big Saving!
Save up to 83% + Get a Free Trial!
Protect Your Privacy on Any Device!
Claim Discount!
X
footer-legal